Our Notable Clients Include…

Innovative Displays have worked all over the UK in establishments of all sizes. We are proud to boast some of the most well known Trusts in the country as our regular clients, a testament to the level of service we provide. 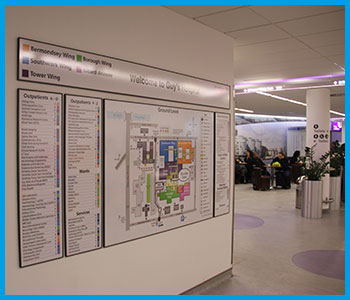 Our frame and print sign system was incorporated at both Guy’s and St Thomas’ Hospital sites alongside other signage methods. Internal & external maps, whole hospital directories, wing directories, lift/stair directories and lift car directories are all paper-based and updatable within hours.

Even at sites as large as Guy’s and St Thomas’ we are able to update whole/multiple wings (or indeed the entirety of both sites) within the same day, and often at short notice.

We have also supplied and installed a large number of display items including flame resistant lockable noticeboards, acrylic display holders, freestanding displays and interchangeable door signs as well as a range of other bespoke and proprietary display items. 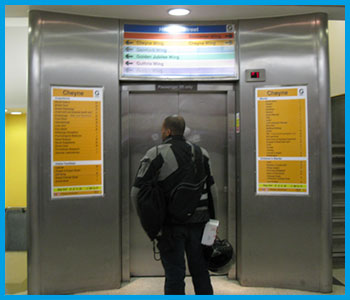 King’s College Hospital adopted our frame and print sign system in 1999 and have continued to use it throughout the many changes which have taken place on site since. Site maps, directional signage, projecting signs and location/facility markers have been supplied and installed throughout the Hospital’s multiple sites including King’s Dental Institute.

The Trust continues to task ID with many of the Wayfinding changes required on site and with sourcing display products including customised whiteboards for theatres/staff banks, bespoke display cases for photography/artworks and other display requirements. 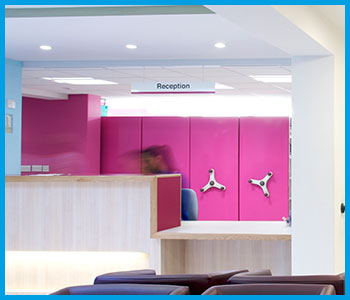 ID supplied and installed our frame and print system together with projecting signs, location/facility markers and door signs as part of a major re-signing project at Kingston Hospital in 2001. The system was subsequently carried through into the new Kingston Surgical Centre in 2006 (including integration into the existing Wayfinding system in place throughout the rest of the site and the amendments that entailed).

All signage at the Trust has been repeatedly amended and extended since, updated and maintained by us on an ongoing basis. We have also supplied and installed a large number of display items including bed-head noteboards, acrylic display holders, freestanding displays and interchangeable door signs as well as a range of other bespoke and proprietary display items. 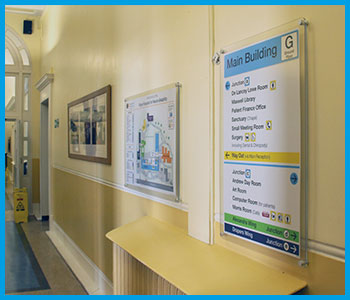 The Royal Hospital for Neuro-disability – Ongoing since 2014

The Royal Hospital for Neuro-disability provided a unique challenge. Built in and around a Victorian hunting lodge left to charity many years ago it boasts many of the original and ornate architectural features (the oldest parts of the site are in fact listed).

ID were tasked with developing a new Wayfinding strategy and format, completely replacing the outdated and dilapidated system that was in place. The brief was for the system to be simple yet effective, to add a touch of modern appearance and colour but without looking out of place in such an historical site. Again we have been able to implement our paper-based signage system and sound Wayfinding logic to completely resign the site – with great results. 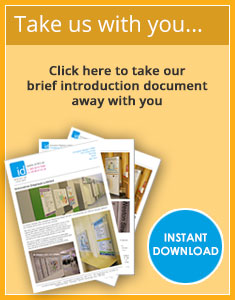 Jump to Our Gallery